On behalf of the Auchenharvie 88 Committee we would like to express our sincerest thanks to everyone who participated in our charity day fundraiser on Saturday 18th August at Auchenharvie Golf Complex.

Big Thank You To The Green Keepers

The turn out was exceptional despite the weather and its safe to say that everyone who participated had a great day. Keeping 72 golfers moving on a 9-hole golf course was never going to be an easy task but feedback suggests that we managed to pull it off.

A big thank you to the green-keepers who have got the course in a great condition. The feedback we have received from visiting players has been nothing but positive!

We would also like to thank everyone who donated items for the raffle, money through online donations, bought raffle tickets and helped on the day with other charitable gestures, everything that was donated is greatly appreciated and we are humbled and overwhelmed by the generosity of our members, friends, family and the local businesses who all pitched in (pardon the pun)

A massive shout out to all the Staff at Bunkers who started the day at 6am in order to keep the hungry (and thirsty) golfers going throughout the day. The effort put in by Sharon and her staff has been truly appreciated by all who attended.

Congratulations to Team Middlemiss the winners of the Texas Scramble with a winning score of 54.3
The guys won a 4-Ball at West Kilbride Golf Club 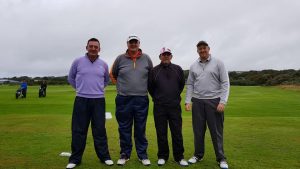 The Highest placed Auchenharvie 88 Team were #TeamUnicorn who finished eventual third place and will be presented with the Peggy Scott Memorial Trophy at our annual prize giving night at the end of the season.

Overall we have managed to raise over £900 that will be split between our two nominated charities – James Macfarlane School in Ardrossan and Macmillan Cancer Support. The exact figure will be communicated and both charities will be presented with a split of the fund total. Every single pound that we have raised for these two worthy causes will make a massive difference to both charities and we can’t wait to do it all again next year.
Again we have been overwhelmed by the generosity of the community and cannot express how happy we are with the event.

Hope to see you all again next year
Sincerely,
Auchenharvie 88 Charity Committee